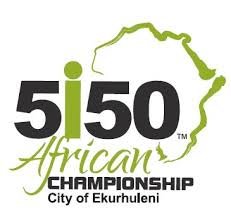 Sunday started with an early, cold and windy morning in Germiston.  The lake that I did my practice swim in just the day before suddenly looked a lot more challenging.  Not being a strong swimmer I was a bit concerned about the choppy water and currents and I knew today would not be a fast swim.  Even the pro field seemed to take ages to get around the course compared to Bela Bela two months before.

Waiting for the start of the race I tried to focus on what Riana had been telling me in training about getting into a steady rhythm.  My plan was to start easy and gradually pick up the pace, sticking to the feet of stronger swimmers.  It felt like we swam for ages only to hear afterwards that the course was round about two kilometres.  I had only been swimming with Riana for two months and the aim was not to improve my time as such but to feel a lot more comfortable after the swim, which I have to say I did.  It also helped that the lake’s water was very clean (I even spotted a couple of fish).

Going into T1 I estimate I was somewhere between the middle and the back of the wave.  I consider myself to be a bike/runner and knew that my race would start now.  My plan was to go out hard and catch as many red numbers as possible and then not to get caught on the run.  The course was an out and back and started with a downhill which I would assume would suit most triathletes as it allowed you to catch our breath and bring down your heart rate.  I would have preferred the bike leg to start with a tough climb to allow me to catch most of the stronger swimmers earlier in the bike leg.  Nevertheless I knew that I should take it easier in the beginning and then hammer it once we got out on the more open sections of the road where the wind would be challenging.

With a head wind going out the conditions seemed to be in my favour, catching a lot of cyclists battling the windy conditions.  On the return leg I seemed to be flying… as you would expect with a tailwind helping us along!  This is the section where I tried to make up time and use the conditions, without spending too much energy as we would still need to navigate a tough uphill right at the end of the course.  At one point of the bike leg there was a 800m neutral zone where no passing was allowed which was a bit frustrating in the sense that all your hard work would be undone if you had a slow age grouper from a previous wave just spinning in front of you, which as luck would have it, happened to me.  There was nothing I could do about it and tried to make the best of the situation by using the time to recover before the last big climb.  All through the bike leg I was focusing on passing as many red numbers as possible and at this stage I didn’t see any and hoped that I would be top 10 at that stage seeing as the front guys also rode hard.

Entering T2 I felt good and the run course seemed to be flat consisting out of a one and a two third loop.  The run course was nice and flat with just a small climb here and there which helped a lot.  I prefer course like this as it allows me to pull away on the uphill and recover on the downhill.  My plan on the run was just to get into a nice running stride and find a comfortable heart rate for the first two kilometres and work from there.  The first lap seemed to pass pretty quickly and I could see that there where athletes in a lot more pain than I was so I tried to increase my pace in order to run a negative split.  I passed three red numbers and was careful about not being passed.  I could see on the turnaround another red number gaining on me with three kilometres left and decided to kick it up a gear.  I remember thinking if he wants to beat me he has to work for it and gave it everything I had.   I have to be honest and say I think the track work I did with Riana helped a lot as I was able to feel strong and in control of the run finishing in 4th position in age group 30 – 34, my best position yet!

Despite earlier weather conditions I enjoyed the race a lot and will definitely be back next year to see if I can improve my performance.

With limited time due to work and family commitment I would like to thank Riana and Dynamic Coaching for making this performance possible through a structured individual program by cutting garbage yardage and getting maximum results within a limited time frame. 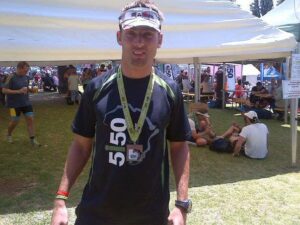