World Sprint Triathlon Championships – Chicago 2015, Thursday 17th September
Bike in wed eve, massive transition, even more massive 450m run wetsuit on, not allowed to take off your suit until you are at your bike, baby oil on calves and ankles imperative… remembering James’s invaluable advice!!!

Decided to eat before setting up t1… just what I’m used to, cramming porridge/honey/banana in whilst feeling nauseous, but hey, gonna need the energy later on. got in to t1, I had already walked the transition the night before so set up in 5 mins and got out of there, too many athletes faffing around, setting up, re-setting, not necessary, set up, get out!

As the weather was so brilliant, I decided to stay in the park, near the swim start but far enough away to relax, away from the tension of the start and all the other athletes. Lay in the park for 2hrs with Jak, trying to chill, lying on the grass in the sunshine, waiting on my wave, focussing on the race, eyes closed, visualising the whole course, going over my mantra. It was almost time… being away from the start, but close enough not to panic was a great strategy, really worked for me. I was almost relaxed as I was herded into the pen 🙂

Gorgeous day, beautiful salt-free water, looking like an ocean its so big. one straight lap, no buoys, well 2 at the exit. 7 swims a week, 7 swims a week, win, win, win mantra with Jackie at the finish (thanks Ben).

3 pens then onto the pontoon, into the water, deep swim start, ready… horn… go!

9 months of training with Diana, ending up with 7 swims a week, this was my chance, the World Sprint Championships in Chicago I was here, I was racing.

Incredibly polite swim start for a change, kept my cadence up, pushing, pushing, world champs, 7 swims a week, win, win, win! The wind was against us catching the tops of the waves into our faces. I breathe to the right and fortunately I was swimming South with the waterfront always on my right, so could glance right at any time and look forward every so often. I knew my swim was my weakest discipline but was determined to race the swim as hard as possible to give me less of a time deficit for the rest of the event, 7 swims a week, 7 swims a week.

Out of the water, helped up the carpeted steps and began the very long run to t1, racing all the time up the blue carpet, no time to relax. Huge run tho, delighted to get to my bike, suit off very quickly thanks to the baby oil, helmet on and off, running all the way through transition, exiting and starting the 1st of 3 laps. Still amazes me that in a world championship race people still stop at the mount line and clamber on their bikes!!!

I ran past them all faffing about and was off. Cycling on the right passing on the left, the course was really busy as my heat was 20th with only 4 or so behind, so I spent most of my time on the left overtaking everyone. Fantastic weather for racing, especially the bike section, able to take the corners really quickly depending on traffic. The surface was a bit iffy and got very narrow a couple of occasions on every lap. Some really big holes, sprayed with dayglo paint and a volunteer with a small red flag shouting “hole” another gap later, no warning, bunny-hopped over the gap only to land in another hole, really lucky not to puncture. after the 1st lap i passed the american Paul Brinkman who had beaten me by 1.8secs in London in 2013 (not that i remembered), I knew this was a good sign as he was a fast swimmer and now I had passed him early on the bike. I also knew he was a fast runner, so pushed even harder on the remaining 2 laps. It was really hot, sun beating down, but I love racing in the heat.

Making sure i was drinking the half bottle (with my 2 gels in) on the way. had to keep focussing all the way, lots of tight turns and lots of traffic, big Canadian guy almost wiped me out pulling out in front, luckily i had seen it coming and managed to slow down slightly just before he pulled out, shouted on your left and smashed past him. Couldn’t see Jackie on any of the bike laps, too busy concentrating but I could hear her shout as I passed the transition on every lap, and before I knew it I was finishing my 3rd lap. Feet out on top of shoes and I was off, along the really, really long concrete path running in my bear feet (sorry Nicky) for about 350 metres, back into transition and along to my rack. bike done, helmet off, shoes on… go…

Out of t2 passing everyone from the earlier heats and onto the road, one full lap and then half a lap, come on, keep the pace up, win, win, win, under 20 mins of pain, world champs kaaaaammmaaaaaaaaaan. Picked up a good pace and just wanted to keep it, not settling in tho, trying to push all the time.

As it was a looped run you got the opportunity to see who was both in front and behind you. the course was very busy with other waves and really difficult to see exactly who you are racing against. You don’t know what they look like, but you do know what pace you are doing, and you can see who is running at your pace or quicker. I knew Paul Brinkmann was behind me, but then i noticed another american athlete (found out his name after the race, Tony Schiller) moving really well. I counted the time I had in front at the turn arounds, 30 odd seconds… ok, then another turnaround, under 20 seconds, then on the final half lap only about 12 seconds. I had planned in my head if he passed me in the final stage I had to stay with him, I also thought if he did catch me on the run in, he must have been hurting making up the time. Pushing harder and harder I had about 500 metres to go, around the Buckingham fountain and then 100 metres to the line. As we stepped in from the street I had decided I couldnt wait till the last 100 metres in case Tom had a better sprint, I decided to give it everything, one last sprint, kaaaaammmaaaaaaaan!!! I rounded the fountain and onto the blue carpet I was sprinting all out, hoping I had left Tom behind, over the line and he didn’t pass me.

I was congratulated in the chute by Tom, both of us racing to our absolute limit, I almost barfed on the head of the girl attempting to take off my timing chip… not very polite.

I was a bit wobbly immediately afterwards, wandering through the athletes, congratulating people i didnt know from different waves, slightly in a daze, what had just happened? I knew I had raced well but where was I positioned? Where was jackie?

The Chicago race organisers were excellent at all aspects of the race… apart from placings. There was no information to be had, anywhere. I was making my way through the ice paddling pools, cooling spray jets, massage tents, food and drink stations, still in this unreal situation of not knowing where I was placed. Got to the athlete exit point and was desparately looking for Jackie, she was nowhere to be seen, waited for around 20 mins, wanting to take my protein drink, do my cool down and see Jak. Then decided to walk all around the fountain in case she was waiting at the grandstand. This took ages as I had to cross roped off areas of the race. Eventually I got back all the way through to the athlete exit point again … and there she was… …greetin. We missed each other and she had been there all the time. She then told me that you guys had been texting and emailing and there was a possibility I had won.

OMG I daren’t even contemplate that, I had to know for sure, got a message from Craig, message from Michal and called Diana. She confirmed that online it looked like I had won, but these numbers can change, (as we found out in Zurich IM, 1st to 2nd) at that point all the info was provisional and unconfirmed, Jak and I were in a daze wandering round not knowing, not wanting to leave until we had the information. We then found out it was pretty certain, I had won and become world champion.

We made our way to collect my bike in a weird cloud of elation and massive happy grins, talking all the time about how the race had gone and where on the course I had heard Jak shout, punctuated with silent OMG pauses trying to contemplate what had just happened. We then had it confirmed it was definitely online, it was definitely true… what a feeling, all those years of training, all those years of racing, I had finally achieved my dream… WORLD TRIATHLON CHAMPION!!!

I am so lucky, all you guys behind me, pushing me on, (I can’t name everyone without sounding all Gwyneth… BUT YOU KNOW WHO YOU ARE). A wee special thank you to my mum, my boys, Diana and Neil and most of all Jak … WOW… 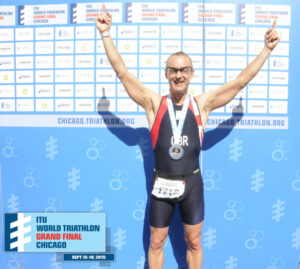