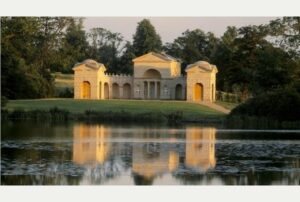 The decision to race at Stowe was a bit if a last minute one, but I am so glad that I decided to go! It was a fun event in the most beautiful setting, on a super tough course. It wasn’t the “smoothest” race I have ever taken part in, but it added to the rustic nature and experience of the event.

The swim route was changed at the last moment in order to make sure that the correct distance was covered (1900m). It involved 3 loops with a little run between the loops. The buoys were easy to see and the course was easy enough to follow. The only tricky part was the swim between the two furthest buoys as the water was thick with reeds! They did warn us about this, and advised as to swim near to a string of blue markers in order to avoid the worst of it, but even then it was quite tricky. I worried about the weaker/ nervous swimmers but it seemed that most made it through ok. I was quite happy with my swim as I made it out first, in a little over 24minutes.

It was a quick dash into T2 and then onto the bike. Again, this was a tricky start as the 800m stretch to the road involved a cycle up a dirt road. Not easy on a TT bike! I heard a lot of people complaining, and it wasn’t great, but we had all had access to the route profile and reviews so we knew what we were in for. And, to be honest, it added to the rustic, challenging nature of the event.

The bike was a 3 loop “lumpy” course, covering 75km. Not any major hills to speak of but it was a rolling route with quite a strong gutter wind. There weren’t any road closures but the local drivers were really courteous and I never felt nervous…except for the really windy patches were I had to hold on for dear life!

The dismount from the bike was also rather interesting in that, due to safety reasons, we had to dismount at the top of the gravel hill we had started on, run to the bottom, and then get back onto the bike to cycle the last 200m into transition. This would have been fine if the half marathon, which started up the hill, hadn’t just begun! Running down a steep, gravel hill into oncoming runners was tricky!

Into T2, running shoes on and off I was off, still holding onto the lead.

The run was, by far, the hardest part of the event. It was an off-road run with many little hills. Really beautiful and also quite exciting dodging sheep, jumping cattle grates and hoping you don’t trip over the most enormous black pig I have ever seen!! I loved it! What I didn’t love, and I hope the race organisers can fix this for next year, was the lack of Coke (the only drink on offer was water) and the fact that the route was 23.5km instead of 21.1km. It may only be a 2.4km difference but it can be soul destroying, especially for beginners.

Even with the tough run I managed to hold onto the lead and come in to take the win in 4h37.

All in all a fun, adventurous, triathlon that I would probably not recommend for beginners but definitely would recommend to those looking for a challenge, in a beautiful setting. Don’t except glitz and glam, arrive with an open mind and ready for an experience.

Thanks to the race organisers for the effort you put it in, and for all the volunteers and supporters that made the day so much fun.