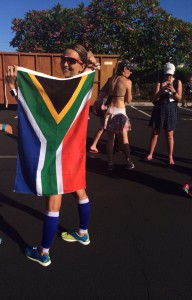 We arrived 10 days before the race in Kona. This was probably the best advice we were given, because we really struggled for about a week to get back into our usual routine. Our sleep patterns were way off in the first week, with us waking up regularly at 1am, then 2am, 3am and eventually, after a week, slept finally till 7am in the morning.  The first loosening-up run we went for was incredibly difficult – the heat and humidity is brutal in that first week as your body battles to come to terms with the climate.

Once we had settled into out proper training routine again, our first goal was to get out onto the bike-course and see what the big fuss was about.  We had both ridden the course on the TACX Virtual trainers, so we had a good idea where all the hills were, but we were curious to see how the virtual rides compared with the actual. As it turns out, the Virtual training was fairly accurate, and while nothing beats getting out on the road, I think we were just that tiny bit more prepared than those who were riding the course blind for the first time.  Having said that, no amount of training indoors with a heater can prepare you for the first two rides on this hot rock!  Every training session was divided into sections of this 140.6 mile course so that we could at least have covered the entire 180km by race day. The famous Queen Ka’ahumanu Highway (Q-K) did her name justice.  Once you are out of the protected town of Kailua- Kona you get to play poker with the Hawaiian Gods where the general playing cards are replaced with howling winds, warm temperatures, high humidity and don’t forget about that climb up to the turn at Hawi. I enjoyed my swim training sessions the most. Me , the deep blue sea with its colourful fish underneath you. I could swim here every day and will never tire of it. Also the floating coffee boat 400m into the sea made every training session worth it.

In the 10 days leading up to “the big day” you would see this little town transform in to a world-class stage, with new performers arriving every day. You very easily spot some pro athletes out on the course, enjoying a coffee at Lava Java or even standing next to you in the Supermarket.  The whole town transforms. Everyday something new and exciting pops up and it’s hard not the get caught up in the hype of it all.

I was very conservative with my energy before the race. I tried to restrict walking and going out too much which is really tough because this is Hawaii after all! I was pretty successful her, but decided that the “underpants run”  and parade of nations was definitely not going to be missed.  These events, together with the rest of the South African athletes and supporters was attended as we would say at home in a “Proudly South – African” manner.

Bike and gear check happens  the day before the race. Never, ever have I seen such a productive team of volunteers – there are roughly twice as many volunteers as athletes, and it’s amazing how everyone in Kailua bands together for this one race – we even saw advertisements on TV from the Major thanking everyone for getting involved, and to please share the roads with all the Runners and Cyclists – something the Mayors of SA could learn from. As every athlete would enter transition, a volunteer is allocated to you who takes you to your transition rack, walks the transition route with you, shows you where your bike and running bags go and makes sure all is in order. These volunteers come from all over the world just to attend and work at this amazing world class event. And they do it all for free – just to be involved.

As Race day approached – I think my husband, Andy, was more nervous than I was.  It was an early 3am  morning wake up for me. I just couldn’t sleep anymore.  I was ready to do this!

The process was pretty much as with any Ironman even, only much, much more efficient – every stage was like a finely tuned gearshift – First to do is straight to body marking, then weigh in and finally access to your bike. Help is everywhere with whatever any athlete would need – mechanics with pumps, people with spare goggles and swim caps, even people with replacement chips if you had by chance forgotten yours.

I was seeded in the 4th wave, 30 min after the Pro men.  I made a rookie mistake that by the time I got to the start in the water there was already 4 rows of female athletes treading the water. There was nothing I could do about it. But tread water till the start and hope I can get out of the masses. The great cannon went off….it was time to go….

The whole swim I never had any open water, it was a absolute madness. I even got kicked in the ribs. I went out way too fast for the 1st km (ave.1:18 per 100m) but this was just to try and get out of what we all know as the washing machine. Half way into the swim we caught up with the age group men. This was another factor that worsened the washing machine effect. Even getting into transition we had to queue to get up the stairs and get down the passage way. Finally the swim was done. Now the race could start!

You don’t jump onto the Q-K immediately. Firstly you get to do a little loop trough town where thousands of spectators line  up in the streets and cheer you on.  Again, every spectator was respectful of the athletes on the day – with no anger and frustration experienced like we sometimes have in SA. This town-loop is about 12km  long with a nasty little hill climb before you hit the Q-K.  The first 30km on the Q-K , I was on top of the world. We had a lovely tail wind and I was going strongly. Soon this changed as we hit the open – lava fields. It’s hot, it’s windy and extremely humid. Even the climb up to Hawi had some very strong side winds coming from the mountain side. You had to be careful as going up and down on the bars you would catch a “speed wobble” and were constantly thrown from the  right side of the road to the left. You can just imagine me going downhill at 64km/h holding onto my tri bars with my right arm and handle bar with the left cycling at a angle.

My second rookie error was that I misjudged the water points on the bike, as the last 20 km of the course didn’t have any aid stations and my water and food was finished – luckily this didn’t prove to be a critical error, and I enterer T2 feeling very comfortable. Again, the volunteers were so helpful, I got  a ice cold towel over my shoulders (a feeling that will forever stay with me),and sun block was applied while I was changing into my running shoes. A marathon was waiting for me. I really felt strong and had to bring my speed down as I hit the road – you can easily get carried away with the cheering of the crowds!  The first part of the run you go out on Ali’i drive. This route took us past our flat, which was a feeling of relief as I knew Andy in his bright South African shirt will be standing there to cheer me on!  Once you come back on Ali’i drive, you go past what they call the “hot corner” and local legend Mr. Paul Kaye was the commentator here. As I went past him he gave me a shout out with the all familiar words “hou bene hou”. I got goose bumps!  After the hot corner, I got to hit the Q-K for a second time, only this time for a brutal section of the run. However, once I saw the Energy Lab I knew I was in for a good time on the day. This thought of mine was confirmed by the heavens opening up and rain coming down – the first time it had rained since we landed. This feeing however, was short-lived.  During the opening Ceremony, Dave Scott and Mark Allen were reliving their Epic battle in 1989, and Mark spoke about how he made his move on the hill up to Palani road.  He also mentioned how tough that hill was, and how one should not underestimate it – these words rang true as it felt like I was running up a mountain.  It was all over though when I heard Pauls voice again meaning I was back at the hot corner and had less than 1km to go. The loop onto Hualalalai road  back to Ali’i road is magical. You feel like you are running on air, Andy was there to hand me the SA flag, and the crowed lifts you up as the voice of Ironman, Mike Reilly calls your name out..Riana Robertson you are an Ironman!

And now it’s all over, all the hard work, all the hours. I sadly didn’t achieve all my goals (I was quietly hoping for a Top-10 in the 30-34 category, which I missed by 2min and 2 positions), but looking back at my time on the day, the conditions and the quality of the field I was racing against, if someone had offered me an Ironman PB and 12th in category the morning after Ironman SA, I would have grabbed it with both hands. The support from family and friends at home was amazing before and during the race.

All this could not of been achieved without my A-team. Firstly my husband Andy, who did all the bike and running training with me as he was racing a Ironman himself, made sure my bike was in tip top shape and did all the running around for me before the race. My Mom and Dad who has always supported me in my sporting journey and last but definitely not the least  goes to Neil MacPherson who did all my training planning and programs for me! 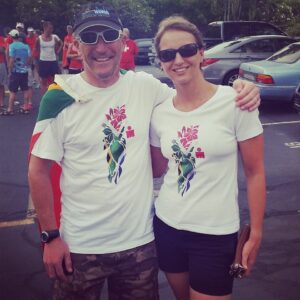