After 22 weeks of training, which included a total of 100km of swimming, 1050km of running and 3010km of cycling, I completed my first Ironman in South Africa in a time of 12.04 hours. It was the first ever endurance race I had ever competed in. It was the first time I had ever cycled on a road bike and swam on a professional basis.

It was an unparalleled experience, something I will cherish for the rest of my life. It was a journey of self-discovery and the fulfillment of a dream.

The Ironman training and the race has conditioned me, it helped me to compartmentalize and put things into perspective. To drive myself forward even when the voice of doubt was screaming in my ear.

A massive thank you has to go to Dynamic-Coaching. I could not have participated without their help. Having an expert personalized training plan, professional support, feedback and advice from start to finish and in every aspect of triathlon constantly at hand, helped tremendously in preparing for and successfully finishing the race.

I was really nervous before the swimming event. I had only trained in the 50m pool in Seapoint and my open water experience was limited to 3 training sessions prior to the race and on race week. The 4th session was going to be a 3.8km swim in open water with 1200 other athletes. The real thing !.

It was the most beautiful scene on race day and one of those defining moments. The sun was rising, the first rays breaking through the clouds to the tone of the SA anthem. The beach was filled with athletes and supporters. It was an electric atmosphere, full of excitement, tension and calm. On the starting line I positioned myself in the middle towards the right as it was not so crowded. I was feeling weirdly sick, anxious and excited at the same time. When the start cannon went off, nothing could have prepared me for what happened next. It was like being pounded in a washing machine amidst 100´s of athletes. I panicked and had real difficulty to breathe, as if my wetsuit was trying to strangle me. (I have to say that, although surrounded by 100´s of athletes swimming in chaotic conditions, everyone had respect for each other and there were no violent incidents.). Stopping was not an option and I could only think of the IRONMAN slogans “keep moving forward” and “the only option is to finish”. Gasping for air and sometimes forced to swim the breast stroke, I slowly moved forward and past the 2 second buoy. I carried on out to sea before turning left just to be on my own, calm myself and get into a rhythm. It took another 5min before I was on the move again with a good pace and rhythm. The conditions were quite difficult and at times the buoys were just not coming closer. But I regained my confidence and thoroughly enjoyed the swim. It was an exhilarating feeling, making the final turn, hearing the crowd and the voice in my head telling me that I had actually made it. Getting out of the water, I was even more surprised by my time, which was 1:09 – a time I had never expected. I was filled with adrenalin and ecstatic.

Transition went well and I was off to a good start in the cycling event. In spite of falling off my bike in a bend and the chain jumping on two occasions, the ride felt really good – almost too good. I was amazed by the friendliness and support of the spectators urging you forwards and the beauty of the landscape. I tried to stay in a group of 6 riders with whom I felt comfortable, fuelling myself with gels very 20min. I completed the 180k in 5:52 , my best time ever.

I lost some time during the transition to the marathon event, as my zipper extension ripped off leaving me to ask others to unzip me before I could go to the toilet or relieve myself. Next time I will wear a two piece suit for sure.

Transition from the cycling event to the marathon went without a problem and I had to slow myself down to stay within the recommended pace. Everything went well and I was really enjoying the run until the km 15 mark. I had suffered from severe stitches a couple km before, but now it felt like someone was sticking a knife into my legs. Never had I experienced anything like it. I had to slow right down and at times even walk. I was basically carrying myself from aid station to aid station. The crowd, the atmosphere were unbelievable, something I would not dare try to describe as it was beyond words. But it gave me strength to go through the pain barrier. The worst part was the lonely stretch, where you were on your own, the voice of doubt echoing in your ear with just the noise of the crowd far off in the distance.

3km before the finish, when I knew I could make it, almost everything lifted. The pain was gone and I started to run with a smile on my face. I felt so much adrenalin and motivation, it was incredible. Turning to the finishing line, seeing the finish and the crowd cheering, gave me an unbelievable sense of accomplishment and a deep feeling of happiness. I knew this was one of my greatest moments, something I would cherish for the rest of my life.

Looking back, the training and the race, it was a most rewarding experience, a real journey. Nonetheless, I am consumed with a new ambition. I know now that I could have done the Ironman in a time of 10.30 – so I will try again. 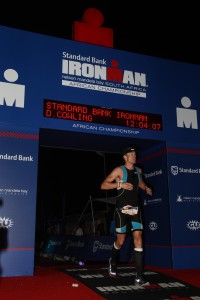