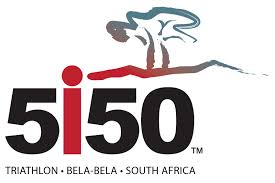 I woke up on the morning of the Bela Bela 5150, to cloudy cool weather and thought to myself, “isn’t this perfect weather to do my first Olympic distance triathlon”, in knowing how hot Bela Bela can get. I had done a few shorter off-road triathlons before but nothing on the road yet and I considered the 5150 to be my first “proper” triathlon.

For those that don’t know, Bela-Bela is a town in the Limpopo Province of South Africa and is approximately an hour’s drive from Pretoria and an hour and a half’s drive from Johannesburg.

I visualised in my mind exactly what I would need again for the swim, cycle and run, ran through my checklist one last time and hoped that I had not forgotten anything before heading off.

I got to the Forever Resorts Warmbaths in Bela-Bela where the 5150 was held, which by now was just buzzing with triathletes. Registration was a quick and painless process and you could feel the nervous tension and excitement in the air. By now the clouds had disappeared and you could feel that it was going to be a scorcher!

I got my bike into transition and had a walk around the venue, I remember looking at the dam which is used for cable skiing and is roughly an oval shape with an island in the middle thinking hell, am I going to make two laps round there?

A race briefing was done going through a whole list of rules which we needed to abide to so as not to land up in one of those dreaded penalty tents. The pros would start first followed by the elite age groupers and then the age groupers. The pros, of course ,made the swim look easy and effortless and I was chuffed to see my coach, Riana Robertson, second lady out the water.

I had waited long enough and wanted to get going so decided to do my warm up swim. The water was between 17 and 19 degrees and wetsuit legal, but still gave you an ice cream headache when you put your head in for the first time. I felt sorry for the competitors that didn’t have wetsuits. You can stand in most places in the dam and it was quite weird to see some of the earlier waves of competitors employing a swim/walk strategy. Others were clearly not too concerned about what time they would finish in and were lying on their backs gently kicking around the dam.

The wait was over and the 30+ men were off and what felt like absolute chaos ensued, arms and legs flailing, I got hit on the head so hard once that I saw stars. Swam up someone’s back then felt someone swim up mine. The problem with athletes standing up in the water is that you land up swimming straight into them and your rhythm is broken. What worked in all the athletes favour however was the whirlpool effect due to the shape of the dam and the amount of competitors.

Before I knew it I had done my two laps and it was awesome to have all the spectators cheering us on as we left the water. Sprayed on loads of sunscreen so that I wouldn’t look like a lobster at the end of the day, got all my bike gear on and off I went. Bela-Bela itself is very flat and even though I had heard that there were hills, I was not expecting hill after hill on the way to the turnaround point, but at least coming back to town was almost all downhill and fast, unfortunately I knew that I had to do two laps and doing those hills for the second time was going to hurt. I was relieved to be on the downhill part of the second lap and got into transition with my legs hinting at cramping.

After the tough bike ride I knew I had to carefully manage my run to avoid cramping badly but luckily after some fluids, Coke and a GU sachet it seemed the cramps were going away. The run portion of the 5150 consisted of two laps round a course in the resort itself so at least the spectators could be right in the middle of the action. They were a big help in motivating all the competitors to get to that finish line. It was really tough in the heat and I was ecstatic to see the finish line and I felt like a serious athlete running down the finish line stretch to the cheers of the crowd.

I really felt like I had earned that finishers medal and as I sit here writing this report a few days later, I still haven’t removed my armband which says 5150 athlete.