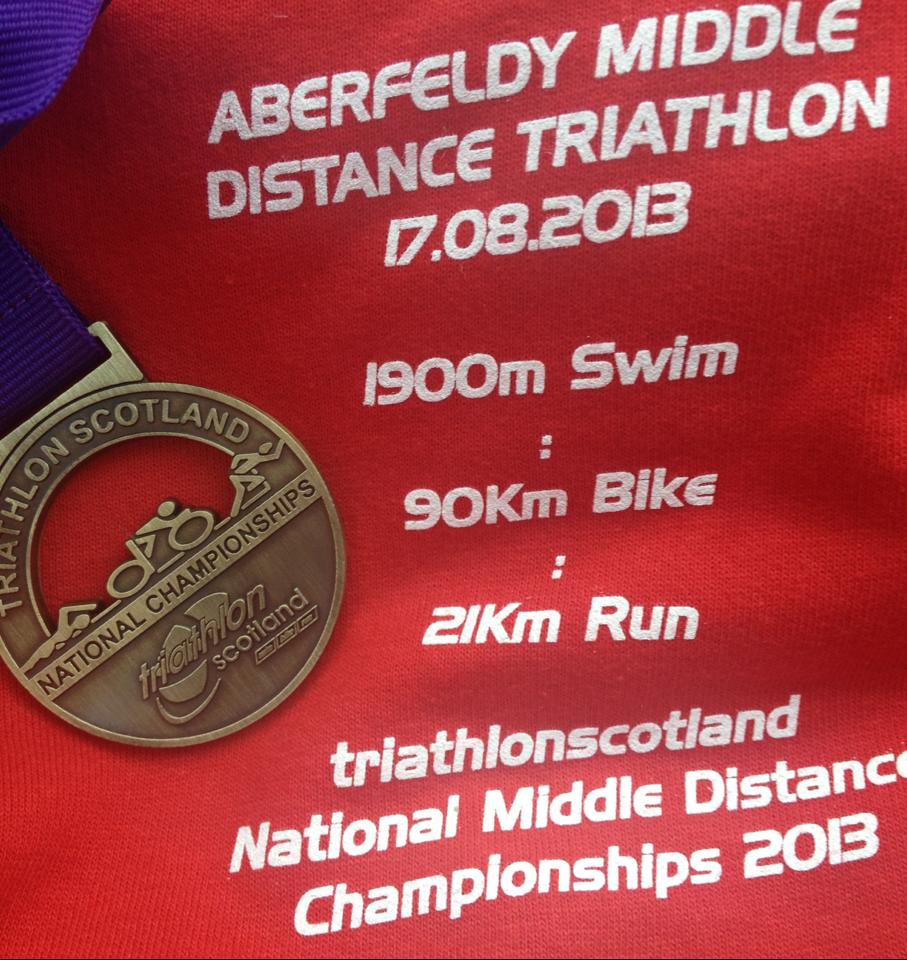 A story from a Dinamic Athlete in Scotland, member of the Newhaven Triathlon Club

A result at Aberfeldy Middle Distance Triathlon – 5 years in the making!

Instead of a regular race report, I thought I would share my past experiences at Aberfeldy half IM to put this year’s result in context. Triathlon success has not come easy for me. I love triathlon and I don’t need to win races to enjoy the sport. But I have harboured a little dream that maybe one day I might get closer to competing against others rather than just against my own times. Here is a summary of my Aberfeldy race results:

2008 – I did this as part of a team. My team had Jen doing the swim, me the bike, and our friend Izzy did the run. We were SO nervous and intimidated but felt amazing after. I remember collapsing on the ground after the bike so relieved that I didn’t have to run. I didn’t record my bike split – which says everything. It was all about finishing.

2009 – Decided to attempt it all. Got an ace coach – Diana – so had a training plan – but tore the cartilage in my knee about a month beforehand. Was disappointed, but still did it with a heavily strapped leg – that I wrapped in cling film under my wetsuit for the swim!

2010 – Knee operated on and back training – saw a big improvement in the run and swim.
My comments to Diana on an email after this race were as follows: In hindsight maybe should have pushed harder on the bike, but wanted to bank an incident free race. felt good on the run and no vomiting this time!

2011 –  Decided to come off Diana’s coaching programme and concentrate on my business that year. Kept things ticking over on my own, and still did Aberfeldy to see where I was at. Results stayed similar with no real improvement noticed.
Swim: 35:33, Bike: 3.26, Run: 2:09

2012 – Back on Diana’s programme and saw big improvements in the swim and run, but bike still the nut to crack. Wrote following post race comments.. Stayed out on edge in swim and by the second loop was enjoying it. That is a first on a race day! On the bike I set off and was overtaken by tons of people as usual. On the run after initial 5 mins felt fine. Felt pretty comfy and sped up a bit for the last 2k

2013 – This year I stepped up my training from Jan for IM Lanzarote in May and decided to keep on Diana’s programme and train hard all summer to see what I could achieve at Aberfeldy this year. My comments for this year: Swim was very choppy but got head down and just got on with the job – incident free. On the bike I pushed really hard up the hills and tried to maintain speed on flats and downhills. Weather was awful – headwinds and rain. Chased after a few women who overtook and clawed back a couple of places on the last 20 km. On the run stayed steady for first half. Did first 5 km in 25mins, exactly on 50 mins at 10km. I did the next 5 km in 27mins, so picked up the pace on the 15km mark knowing only had 6km left. With about 1km to go I spotted a woman ahead who looked like she was in my category. Crept up on her and with half a km to go I went for the overtake and surged for 100m keeping my fingers crossed she wasn’t going to come with me. She faded thank goodness, and I kept running hard all the way to the line which I crossed feeling totally wiped out but knowing that I had timed my run and race just right.

As you can see, this year’s results were a massive improvement for me and I was so chuffed with the times after, it was a truly brilliant feeling. So, to get to the final bit.. Unaccustomed as I am to winning anything we packed up our gear and were just about to leave, when I popped back in to the centre just to see where I had come (felt so embarrassing asking but really wanted to know). And that’s when I found out that I had come 13th female overall, 4th female Vet overall and 2nd female Vet in the Scottish Champs!!! That really was the cherry on top of a perfect day!

It has been good reflecting back on the last few races and reminding myself just how far I have come. The year when I came off Diana’s programme is also interesting. It was still good to do Aberfeldy, but on reflection staying the same is not very inspiring and I missed the discipline of being on a programme and the motivational chat from Diana. When I am feeling lazy or stressed with work and want to miss training, I hate having to report back that I didn’t do a session so I more often than not just get on with it. I think that is why I am now seeing results. And it feels good! I am also 5 years older – so should be getting slower. Just shows if you have good advice (cheers coach Diana) and stick at something – you can be the best that you can be!