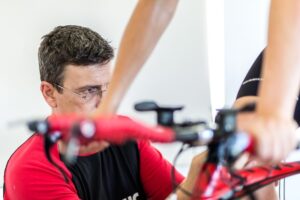 As a participant in sport Neil  has a varied background having as a junior won regional championships in Judo and also being competitive in Fencing and Rugby before taking part as a senior in duathlon, where he represented his province at Nationals and won selection to World Champs at Rimini in 2001 before moving into Triathlon.

Neil began coaching in 2003 and as coach and coach educator he has worked with athletes and coaches at all levels from development to Olympic and has always focused on developing and implementing strategies that help develop the individual and give them the tools to strive to achieve their goals.

Neil has been involved in Coach Education since completing the British Triathlon Coach Development programme in 2008.  Since then Neil has run over 25 Coach development clinics including:-