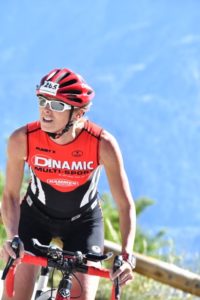 Diana is a level 2  ITU recognized BTA coach and STA swimming coach with 20 years of racing and 12 years of coaching experience.

Before turning to coaching,  Diana was a seven times national champion at elite and pro level  across a wide range of distances and disciplines:-

Other Notable results and awards include:

Diana retired from competitive racing in 2006 and moved her focus to coaching.

Under her guidance Edinburgh University became a dominant force in Triathlon in Scotland with multiple National Championship wins being won by the club and in 2009 Diana was awarded the Price Waterhouse Cooper Coach of the Year Award.

Since 2010 Diana has focused on Dinamic and helping the athletes that come to Dinamic achieve the best that they can be.  Her approach is one of consistency and commitment being the most important attribute to success and she has helped many athletes achieve their own personal goals.

Diana teaches her athletes to focus on the process and this leads to results which are clear to see.

Diana has helped athletes to Age group wins at local and National level and has a remarkable ratio of Kona qualification for her Ironman Athletes, which includes