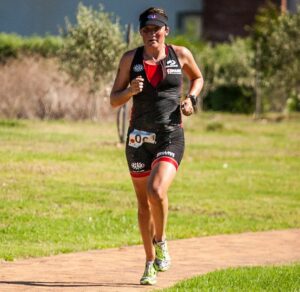 Ok, so one week before 70.3, what was my thinking racing an Olympic distance event? A question I was asked by a few people. There were reasons and a method to my ‘madness’. Confidence building, a reminder of that racing hurt and mindset, to run through the motions in transitioning from swim to bike, bike to run and a test of all race day equipment. Nothing quite prepares one better for racing, than racing. And it it will be close on 5 months since I last lined up at the start of a triathlon, and even longer since I last had to wake up at 3:30 am. That part was not ideal.

The Olympic distance even in this case happened to be the WP Triathlon Championships, held at the Val De Vie estate in Paarl. The organisers have been struggling to find suitable race venues here is the Cape, but I think they have  found a treasure with this one. There were a few other issues that they need to address, such as the distance of the various legs.  The bike turned out to be 3-4km short and the run 1.5km which is around 10% short in both cases. Not acceptable for a championship but with next week in mind the shorter distances, for me personally, were most welcome.

To the disgust of many, the water was too warm to allow for wetsuits, which meant a non-wetsuit swim was called. Such a pity because I was looking forward to a good solid effort in my Huub Aura suit. Anyway I had a decent swim, coming out of the water about 2min behind Mari Rabie and Robyn Williams. Onto the bike I was flying, my equipment and position felt spot on. I was loving every minute of it.  I managed to catch Mari and Robyn at about the  20km mark. It was also the first triathlon that I had ridden a disk wheel and wow, what a difference it made.  I am stoked to be able to use one next weekend, thanks to Brett at Fly Wheel Hire.

The wheel set I used was a HED Jet disc and HED Jet 60 front. The Jet is designed as a normal wheel with a 24 spoke count but with an outer carbon fearing. This makes is the ideal wheel for triathletes, as it is not as stiff or as harsh a ride as other disk wheels but with the same or actually better aero dynamic properties. This will save your body from unnecessary road vibrations and save you energy for that run, all whilst going faster.

Anyway back on the bike, and just as I caught the Mari and Robyn, one of my tri-bars came loose, forcing me to ride on the base bar. Mari stuck with me for a while, into a slight head wind but as we turned for the final 5km stretch back home. With the wind was behind us the disk really got a chance to come into play. I managed to find a way to lie on the loose bar,  in order to get more aerodynamic. I put a gap into her almost immediately as the disk wheel just sung behind me. Mari entered transition as I was exiting. I was half expecting her to come running by, but fortunately she did not. I was very conscious of trying to holding something back even though my actions may not have shown this. In case I had forgotten, I had Neil on the sideline shouting and reminding me to slow it down and take it easier.

It was a great day out, I felt strong and in control. My objectives were all met, and the boost of confidence will certainly come in handy for the battle that awaits next week.