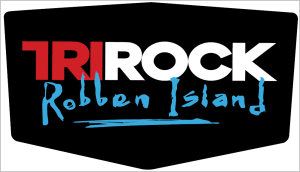 It all started on the 11th October with a bright, sunny day, until we arrived to register and load our bikes on to the ferry for Robben Island…then the weather started looking a bit ominous for what lay ahead for race day……

The boat trip across to the island was fairly calm and a lovely experience (this was my first time to the Island and seeing the whole island from a different perspective). We disembarked at the harbour and had a sneak look of where we were going to do our swim, it was comforting to know we were in the middle of the Atlantic with some walls protecting us.

We were then bussed up to our accommodation to make ourselves comfortable before we went down to have some sundowners. The sundowners were awesome and watching the sunset behind the lighthouse was a surreal experience. We got to know some of the athletes and make some new friends along the way…and I did sneak in a few drinks in….sorry coach;-). After the sundowners we then went on the tour of the prison, which was and eerie experience and I felt heartbroken seeing what the prisoners had to go through….

Then dinner, I was so hungry by then, but wow did Primi cook up a storm! A bit too much for my and my fellow triathletes liking me thinks and I only finished half of what they served (or I would have sunk to the bottom of the harbour on race day).  After dinner we chatted a bit more, listened to all the stories of the experienced athletes and then found out I was one of the many who’s first triathlon it was. This calmed down my nerves a bit! Then off to bed…hoping no ghost haunted me for the night!!

I was awoken by a kid saying,  “Everybody is awake and having breakfast!” ! I panicked a bit, but then realised that we had plenty of time and half the other athletes were still in bed… relief!  All packed and waiting for the 6:45 bus to arrive and to take us down to the start line. This is when the nerves started kicking in, but they were soon calmed when I went down to meet a follow Dinamic athlete, Noel Frost, who helped me through setting up transition and the ‘do’s and dont’s of tri-racing. The nerves took another pounding when I realised my HR monitor watch died, typical!

Race brief given and all set and ready to go…..Eish, the water was cold, a bit of a shock to the system. I settled into my stride after the first lap and got into to the zone and then looked up to see where I was as I was not hitting anymore other swimmers from overtaking them…. To my shock, I realised I had swam to the harbour wall…..dumb ass move, so swam back on course and it was great to do and extra 100-150m swim;-).

In the first transition I thought it was going ok, but it did take a bit of time before I was on the bike and off. I realised then that I had gained lots of lost ground after the swim because I looked into the harbour and still saw plenty of swimmers. On the bike I got into my stride and started catching up on some riders and got a glimpse of some of the front runners. I thought if I could keep them in my sights I could take them on my run. Second lap came around and pop….there went my tire. I rode on a bit to find a sheltered spot as it was raining and the wind was pumping! I struggled to get the tire back on, and got demoralised to see all the other athletes passing by…..

A guy I met the night before, Johan, was really great and stopped to help me out and finally got the tire sorted. Then Noel  passed by to help me out with my chain as it came off just after the tire was sorted! What a day!! Finally, after my ordeal, and pretty much sitting at the back of the race I was off again and said I would stick with Noel to the race end, but Noel said, “go and catch up-you’re a strong runner!” So I did…I put foot and started catching a lot of athletes.

In the second transition I changed quickl,y did not bother about refreshments, and ran hard and fast and by the end I had caught up to some of the top lady runners…..I felt I had a good race. I finished strong with some gas still in the tank. After the race I congratulated a few of the people I met the night before and thanked Johan for helping me out. I walked about 1km down the road to try and catch Noel to give him some support towards the end as his Achilles had been given him strain in the past week. He finished, having raced really well.

After all the commotion of prize giving  we were off to the ferry once again for our journey home, the fun was not over just yet…..The seas where rough with big swells! I am lucky I spend a bit of time at sea and in boats and was not phased by it at all. It was a bit frightening for most the way the boat was being rocked about by the untamed seas and it saw plenty of athletes turning green and running to the bathroom at lot…I was not green with envy;-).

Overall,  it was a great experience and great one for my first triathlon, I have learnt a lot and can understand why everybody says it is an addictive sport. The views were breath-taking and sometimes you wondered if you were in a race or not. The overall race was an exciting vibe, with a few issues needing to be addressed for next year by the organisers, but all in all a fantastic race…