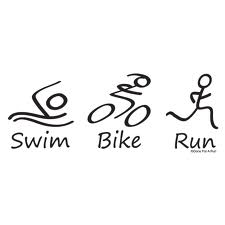 I am a middle aged guy who since childhood dreamed, like most boys do, of sporting greatness. The problem for me however was that I was born with very little talent AND congenital bi-lateral hip displasia and as a result most of my childhood was spent not on sports fields but hospitals. As you grow up with this you also begin to develop a self-image that says “You Can’t do things that NORMAL people can” and this off course has a massive impact on your confidence as a person.

One of those childhood sporting dreams was to do a triathlon (because I always thought triathletes looked so cool…) but never dared to try out of fear that I would just make a fool of myself.

My father died when he was 32…and when I turned 32 it was a sobering moment for me and a reminder just how quickly life passes us by if we let it. That was the moment for me that I decided to not let my fear hold me back any longer and I entered my first triathlon.

I only did the swim and the bike (I was still too afraid to attempt running just in case people will point and laugh – crazy I know!) so I never got to cross that finish line.

But after that first race I was hooked…I absolutely loved everything about it. That desire to cross the finish line kept on growing stronger but it took another 4 years before I had courage to attempt the run and my goal was just to cross that finish line even if I have crawl to get there. I did it!

It was after a race in 2012, that I was approached by a race official and he asked me what was wrong with my legs and why don’t I enter as a para-triathlete!

It took some time for me to process this and eventually I did enter a race as a para athlete, it just so happened that it was also the Central Gauteng Provincial Champs…and to my amazement did well enough to be selected to represent my province at the South African National Champs.

I went to East London and came second in my category which made me eligible to go to the African Continental Champs in Morocco.

What an incredible learning experience that was. Again I came second in my category but I was a long way behind…it was by no means a close second, in fact it was a little embarrassing…I learnt there in Morocco that there is a big difference between “competing” and “racing”

That night in our team hotel at supper someone who has since become a very good friend, Oswald Kydd, sat me down and we had a good long chat about “racing” and he recommended some things I needed to work on…but probably the best advice he gave me was this: “GET A COACH!”

When I got back to South Africa I immediately contacted Neil at Dinamic Coaching. He had only 3 months to transform me from a “competitor” to a “racer”. You see I had been selected to represent my country at the Triathlon World Championships in London.

I owe a massive thanks to my family, friends and my coach Neil MacPherson.

With Neil’s coaching and lots and lots of hard work I went to London and came 9th in my category at the World Champs.

As I write this I still struggle to believe that this is my story, that I achieved a top ten finish at the World Championship and finished the year ranked number seven in the world.

I guess what I am saying is this…If I can do it then so can you!