Going into this race I didn’t really know what to expect, except that I had hear rumours it was a tough one!

Having just arrived in the UK (relocating from SA) training had been a bit tricky. It had been a learning curve of finding a pool to swim in (literally finding as my sense of direction is shocking!), discovering new run routes and figuring out where to ride my bike. The cycling bit was the hardest and I ended up not riding nearly enough so knew I was going into the race very undercooked for the cycle leg.

Race morning dawned and it was a stunner! That kind of morning you can only dream to have for a race. Bike racking was quick and then it was off to the swim start for the race briefing.

The swim was a beautiful loop around a lake, circling a little island in the middle. It was a really shallow lake so you had to be careful of not swimming aground! The gun went off and it was (as always) a sprint for the first buoy…and some good swimming feet! I managed to make the break with the front pack and hang on for the rest of the course. The swim had gone to plan and I was excited to get to my bike in 28min. 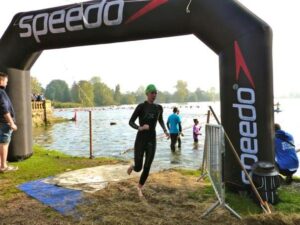 Having a good T1 was a relief as I was a bit out of practice, but thankfully it was plain sailing onto the bike course.  The only hiccup was bouncing my rear bottle at the exit of T1 but I had another bottle and enough nutrition on my bike to be able to leave it behind and race on.

When they said the bike course was tough, they weren’t kidding! I had known that I would suffer on the bike and that it would really come down to the run for a good finish, but I had not expected to suffer so much. After Lap1 I knew I was in trouble and had to back off a bit for Lap 2. It was really frustrating but racing 70.3 distance means you need to be conscious of the 21.1km run at the end and keep something in the bank for it.

I came off the bike into T2 with very wobbly legs. I had totally overcooked it on the cycle and was going to pay for it on the run! 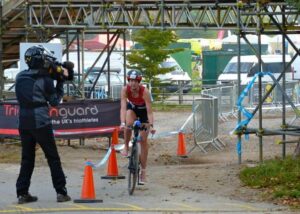 The run course was probably the most beautiful course I have ever had the privilege to run on…and one of the most challenging…there was not one piece of flat- we spent the whole run going either up or down!

I had been excited about the run from the moment I signed up as the off-road track suits me. I managed to put 7min into the girl who was ahead of me (and managed to pass her going up one of the fields) and felt quite comfortable going into the second loop. And that is when the wheels came off!

The second lap went by in a blur. All I remember is that it involved a lot of walking, drinking lots of coke and looking (hopefully) into the distance for the end! The run was really mentally challenging and I had to keep talking to myself, reminding myself that I had made it this far and just need to push through for the last few km’s. Something did kick in and I managed to push out a good pace for the last 3km’s and finish with a smile! 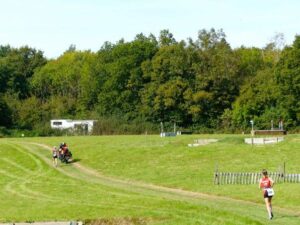 Looking back on the race I am super happy to have finished in 3rd place, even if the race itself had not gone according to plan. I really can’t wait to go back next year and to tackle it with strong cycling legs and quads that know what’s coming on the run!!

The race is also one of the best organised I have ever experienced and if you are planning to come and experience racing in the UK I would put it at the top of the list. A huge thanks to the Castle Triathlon team for the memorable day out.

A huge thanks, too, to Dinamic-Coaching for getting me race ready and to Xterra Wetsuits for providing the speed needed to hang on to the front pack!